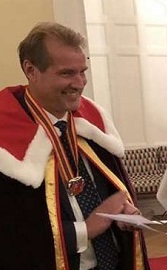 The Maître, Jens Miöen, opened the session of the Annual General Meeting of the Commanderie de Bordeaux in Stockholm, on 16th September 2020.

Unfortunately, Cecilia Ekfeldt is resigning from the Privy Council and leaving the Commanderie. A new member will be inducted shortly.

Sadly, Sophie Maillard has also decided to leave the Commanderie.

Cecilia will continue to assist the Commanderie thanks to her contacts at the Embassy and at Business France.

Due to Covid 19 restrictions, the annual dinner will be postponed, probably until springtime 2021.

Johan Magnusson told us about his first visit to Bordeaux, in spring this year.
Blind tests were held (thank you Ann) and we had some interesting discussions.

Here is the list of wines tasted during our annual meeting :