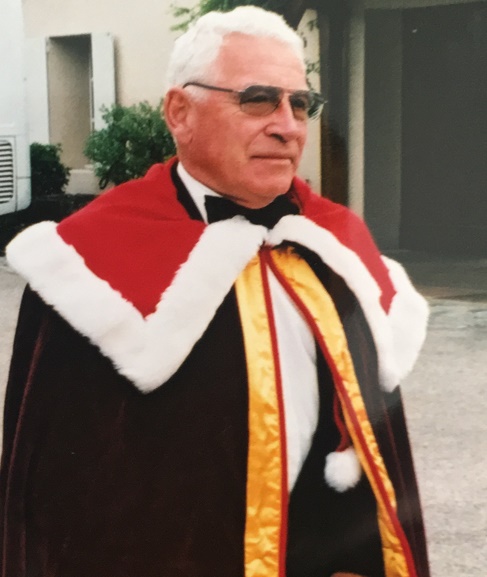 The funeral service for Mr Francis Fouquet was held on Monday 24th August 2020, at the Church of Saint Martial in Bordeaux

Francis Fouquet took over from Henri Martin and was President and Grand Maître of the Grand Conseil du Vin de Bordeaux for 9 years, from 1992 to 2001.   Michel-Pierre Massonie in turn took on this role in 2001.

In the silence of the pain we share, we see standing before our eyes the same image, the same memory: a discreet man, whose expression revealed his goodness and rectitude, a man whose true value was appreciated when one approached him, a man who had many friends, a man whose face lit up with an indefinable smile, which now, at a distance, seems so far away.

No my Dear Francis, I cannot let this coffin disappear without telling you on behalf of everyone who knew you during your term as President of the Grand Conseil, many of whom have also left us, but most of all me your successor in 2001, the sorrow your passing causes and the memory of you we will always retain.

Your dedication to helping others was always your primary motivation and in particular the members of the Grand Conseil du Vin de Bordeaux, here, and in numerous Commanderies based all over the world, where you still had numerous friends.

So, dear Madam, Ladies and Gentlemen, you his children, you his grandchildren and great-grandchildren, I present to you my sincerest condolences and remain, in a personal capacity, in union with your Family by my prayers.

A Dieu, Farewell Dear Francis, and from where your soul rests now, please watch over us all."